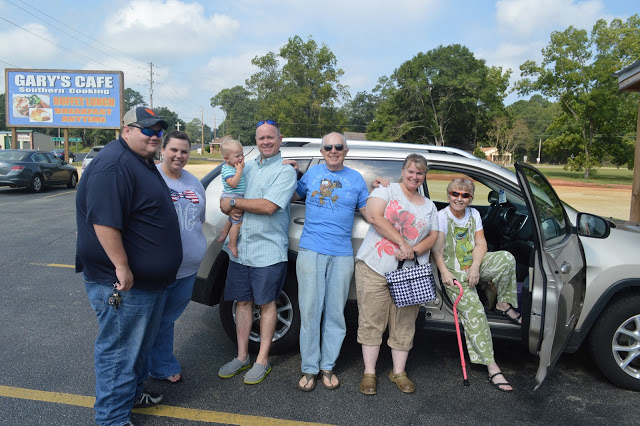 Lookie, lookie, I finally figured out how to get pictures back on my blog.  It seems that Google/Blogger is not playing well with Microsoft Edge which comes with Windows 10 so I had to add Google Chrome so I could access my photos.

Anyway, this is one picture of part of our family (see list of names and associations on the last post) after we had finished a great breakfast together.  I am the one sitting.  And this was taken prior to my last surgery. 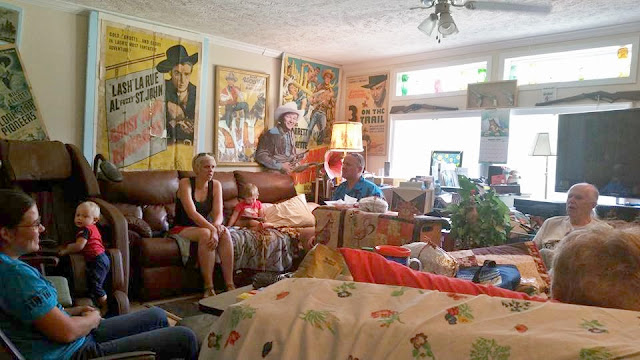 And this is the other part of the family that was here the day before.  I am the head of hair in the lower right corner.  It truly was a fun filled weekend.

Last weekend our oldest son and his wife were here from Atlanta but we didn't take any pictures.  I had finally begun to feel somewhat steady on my new hip so we took off for breakfast at my favorite fast food place, Whataburger, and then to staples to buy a day planner.  I was beginning to loose track of when different people were coming and decided I needed a place to write it all down.  Between all the home health people and four doctors who want to see me I am a very busy lady.

But guess what! Last Wednesday no one was scheduled to come.  Eric and I looked at one another and decided it was time for us to visit Pensacola.  We ate at a favorite place and then went shoe shopping.  And we did very well for ourselves.

Funny, I didn't get a picture of the 3 pair Eric got for himself.  What I did learn is that 3 hours in the car and both of us were stiff in the joints.  I guess we are out of travel condition (and of course we are getting older).

And last but not least, I spent 4 hours in the studio yesterday.

I had already gotten the appliques on the background but hadn't stitched them down. Now this one is complete.  Unfortunately I am 5 months behind on the two BOMs I was working on and hadn't even started on the new one I for sure want to do.  But I did feel productive so I guess I will be in the studio again this weekend.

And when it came time for a rest I could be found on the deck with our wonderful animals.

Have a great weekend everybody, I know I will.  Gari
Posted by Gari in AL at 12:26 PM 5 comments:

This area is supposed to contain a picture of the people mentioned in the first paragraph.  I am VERY unhappy with Blogger, which has got to hell since Google took over, as I have been unable to upload any pictures.  But I am leaving the picture information just because I want the family names to be here.

The party started around noon on Saturday.  I had planned to greet everyone out on the deck but the humidity went up and I went in.  So I greeted them from my hospital bed in the living room.  The nice thing about our family is that they are VERY social so the conversation never lagged and I did not have to keep things going.

Our dogs (three doxies) are not used to a lot of people.  The oldest, who is afraid of strangers and loud noises, spent the day leaning against my husband but she really did alright.  The other two quickly warmed up to the two youngest crawlers.  It was having those babies down on the floor with them.  And, boy the kissing that went on.

The one thing the dogs did not get to join in on was the food.  Our daughter planned the menu and brought all the food.  And our son in law is a great cook.  He brought his grill, set it up under one of our younger oak trees and proceeded to grill steak, shrimp and quail.  We then proceeded to eat, talk, and laugh. Quite a raucous group: it’s a good thing we live out in the country.

On Sunday the group in the picture above met for breakfast.  This is a place by the side of the road where we had never eaten but we will go back.  I haven’t had any appetite for a few months but on this Sunday morning I wanted 2 eggs over easy, hashbrowns, bacon, toast and coffee.  I could only eat half but I toted it home and had it the next day: good the second time around.  Then after breakfast the group broke up and started heading home.  I was still running on a pacemaker high so Eric and I drove 56 miles away so we could eat at my favorite hamburger place, Whataburger, get coffee and a donut at Dunkin, and then good grocery shopping at Publix.  Then it was time to go home and crash.

Health Update:  Tuesday I showed up at 7am to get ready for hip replacement surgery.  I hadn’t slept much the night before so I think I was asleep before they gave me the anesthetic.  I am told that the operation took about 4 hours.  I, again, didn’t have any pain while lying in bed.  However, standing on my poor, cut up leg was a different matter.  I resorted to pain management.  Initially I had Demerol IM but was told that no one was going to come to the house every time I wanted to get up so I better use the pills.  While in the hospital I saw a physical therapist twice a day: interestingly I took a pain pill twice a day.  He gave me leg exercises, walked with me a little and then had me sit in a chair for 30-60 minutes.  On Friday, while I was getting ready for discharge, he told me some of the exercises I could expect to be given when I start physical therapy at home.  I really do plan to try to cooperate with this as I am wanting to get back to quilting as soon as possible.

Today the home health nurse came and we reviewed my needs.  She will be coming twice a week, the aid will be coming twice a week and the physical therapist will come at least twice as week.  This is more of a social life than I am used to. But there was one really funny thing.  She asked to see my medications and I told her to pull open the drawer where I keep them.  The drawer was empty.  I got into my walker and we looked everywhere.  Eric was out so I called him but he didn’t know.  The nurse said she had pulled every drawer open and didn’t see them.  However, when we checked again we found them in the wrong drawer.  I was very glad to see those bottles and find they were not in the hands of others.

Now I hope we will settle down to a more normal schedule.  I think we may have company again next weekend, out oldest son lives in Atlanta and feels the need to come check on us.  It really has been nice to see more of them all, I hope it continues.  Gari
Posted by Gari in AL at 1:37 PM 4 comments:

And The Saga Continues

I finally started back on my lavender socks and completed the heels.  I did the FLK heels: I had to watch the videos 3 times before I could remember what I was supposed to do. Anyway I got the heels done and since I knit toe up I had to do 1” beyond the heels before I could start the leg. I was 3 rows into the leg before I noticed that I had dropped a stitch.  I looked around for my crochet hook but couldn’t find it so I am stuck until I can get back into the studio.  Sorry there is no picture.  Blogger is not letting me upload one at this time.


Health Update:  It took almost 2 weeks for the orthopedist to get back to me about a date for the hip replacement: Sept.8th.  And then I was scheduled for a pre-surgical registration and lab work appointment on this past Wednesday.  Part of the registration included an EKG and chest x-ray. Well, I had done almost everything when I was asked to return to the original office to talk with a cardiologist.  When I got there he told me my heart rate on the EKG was 27 (it looked like a flat-line on the print out).  Now I have had A-Fib for 15 years and it has been controlled with medication.  And I did know that my heart rate had slowed some in the last few months, but not this slow.  The cardiologist highly recommended a pace-maker. Would you believe I had that sucker implanted in my chest within 3 hours?  The real downside was that I had to stay in the hospital, with a heart monitor, so the doctor could see if it was going to work.  However my hip replacement surgery is still set for next Tuesday.  I was scheduled to be at the hospital at 9 but they called yesterday and told me to be there at 7.  For someone who is used to sleeping in every day this will be a real struggle for me.  ;-)


For now I’m back home and looking forward to having several members of our family here for a cookout today.  Our daughter and son-in-law have planned grilling shrimp and steaks along with frying scallops.  Additional family members expected are our youngest son and his wife with their two children and our oldest grandson and his wife with their son.  I am planning on sitting on the deck and enjoying being surrounded by family


I hope everyone in the USA enjoy a fun filled Labor Day weekend and that others in other countries enjoy their weekend.  Gari
Posted by Gari in AL at 7:13 AM 6 comments: