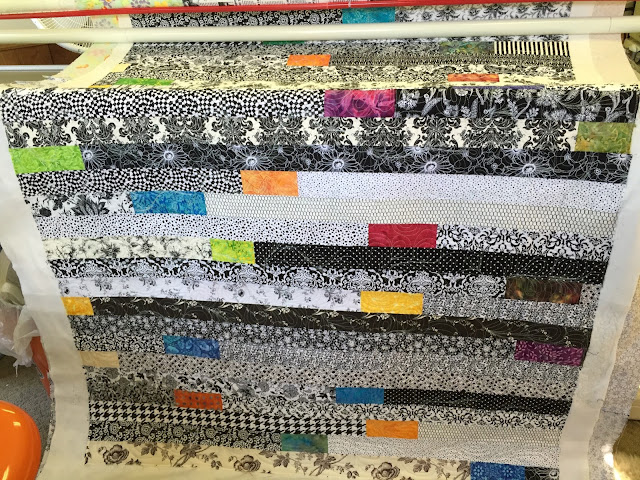 I put this quilt on the frame in September 2014 and then became sick eventually being diagnosed with cancer (breast and bone). I put in 19 days in the hospital and 6 months of bed rest before I was able to be up. Even with that I have only been able to stand at the frame twice. But today, the second time, I was able to finish the quilting. I started this quilt for our great granddaughter who will be 2 at Christmas. She will be visiting here in two weeks so I am going to try to get her quilt bound and the label on it so she can finally have a quilt from her Nana. 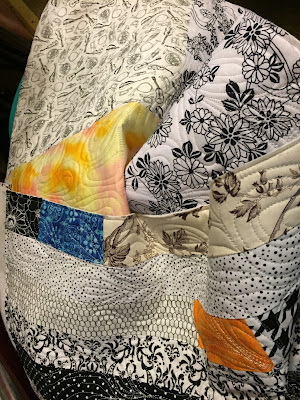 I still have to put the binding on.  The current problem is that I sewed the binding together, lots of black and white strips, but that was over 18 months ago and I am not quite sure where I put it but I am about to make a concentrated effort to uncover it. 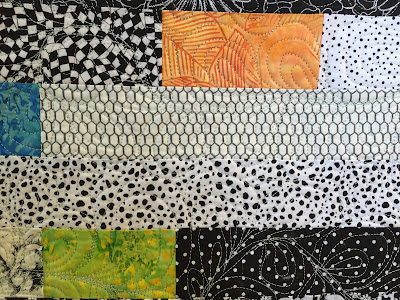 The quilt is made from a black and white jelly roll and batik scraps.  It was a lot of fun putting it together.  The quilting is free motion and I think it was a pattern that Leah Day showed but I am not really sure. 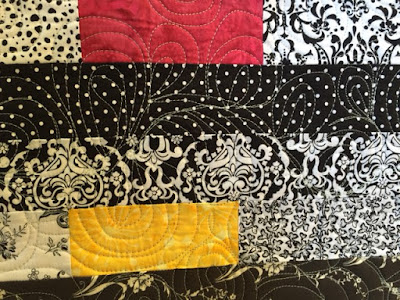 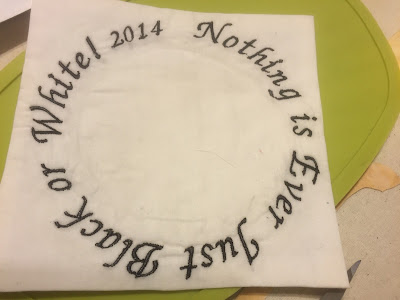 I designed the label, obviously in 2014.  I was really surprised to find it last month and have held on to it, carefully, so it would be ready for the finished quilt.  I have been so offended by black and white thinking that this quilt says "there are shades of gray and lots of colors in life" so don't box yourself in.  I still need to add the quilt info into the middle of the circle but it will get done this week. 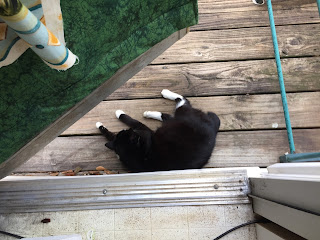 Please note that this is my cat, sleeping on the deck.  The interesting part is that she is sleeping right outside the studio door.  I took this picture right after I jumped over the cat to get into the studio: I am right inside the door, looking down.  And please note that she is still there and didn't even know that I had been there.  Eric has been taking pictures for Facebook of the "37 places Stubby sleeps on the deck," but this is one that has become a favorite.

I am trying to put in a little more time on the quilting/sewing front.  I have a couple of sewing/embroidery projects I want to do and a few quilt UFOs I would like to finish.  And, of course, I have a couple of BOMs I am WAY behind on.  I don't move as fast as I used to but I seem to have as much piled up to do as always.  I guess I will either keep busy or be frustrated a lot.  We'll just have to wait and see which one takes over.  Gari 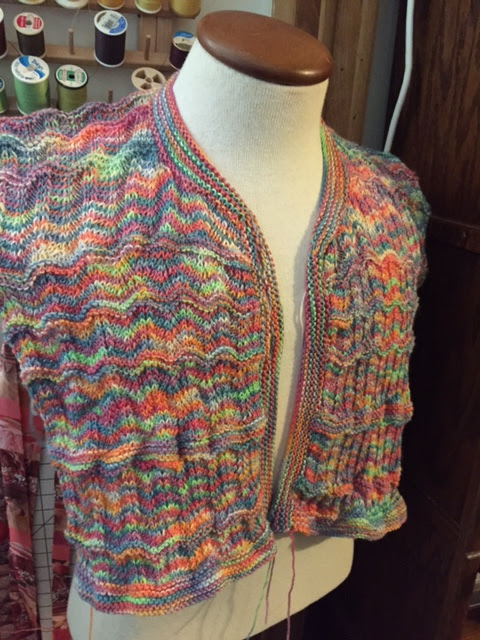 I am so excited, I am very close to being done with this sweater.  I only have 19 rows left to knit on the back. 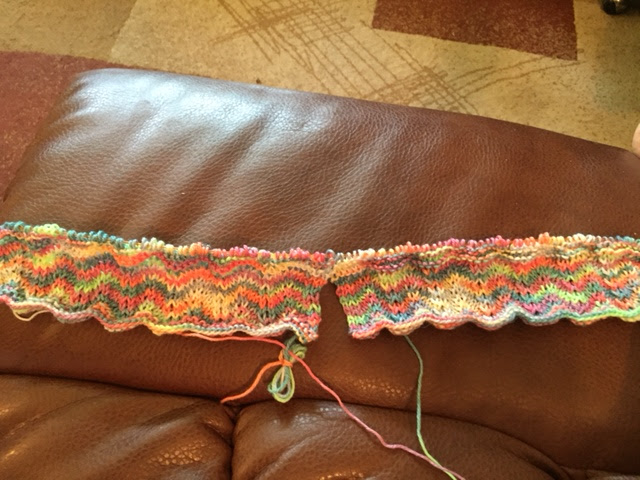 These are the sleeves and as you can probably tell I have a lot of rows to knit before they are done.  I have been knitting the sleeves in the house and the body in the studio and nothing on a UFO.  I really want to get this done: I did send for yarn for the cowl I want to start so I have to get this project done and done. 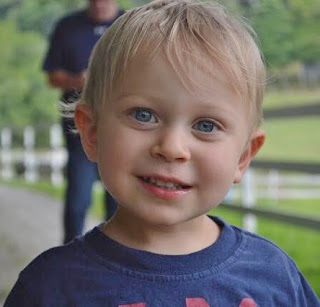 No, I am not knitting this sweet child.  He is our youngest grandchild, Gus, and yesterday was his birthday.  He doesn't live close to us and doesn't know us but every time I see that sweet smile I feel kissed. 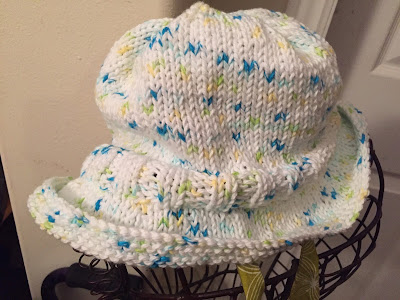 I got the white hat finished yesterday.  I made it one size smaller but it still is a little big.  The only reason I have been knitting hats is to have something on my head with the hot summer sun beating down on me so size does not really matter. 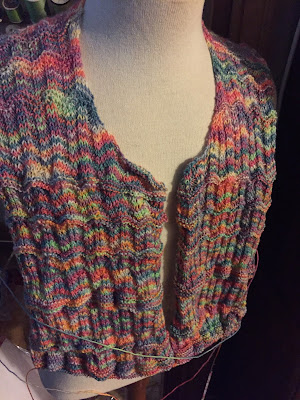 It is hard for me to finally believe but the front of this sweater is done.  Now I have to extend the back to match, knit the sleeves, knit the button band, and seam the sides and it will be done.  And I will need to block it.  (Do I block it before or after I seam the sides?)  Of course this means this sweater will not be done this summer (I am a VERY slow knitter) but I will either wear it with a long sleeved pullover or display it on a mannequin.

Now that the hat is finished I am going to start a knitting UFO project.  I have been knitting the sweater in the studio where there are no animals to walk all over me and very few interruptions so I can count the repeats.  In the house I will be knitting socks and probably finishing up sweaters.  I haven't pulled out any of the UFO bags so they will be a surprise to me but I do need to finish things so I can use the project bags for new projects.

And I do have a new project I want to start. 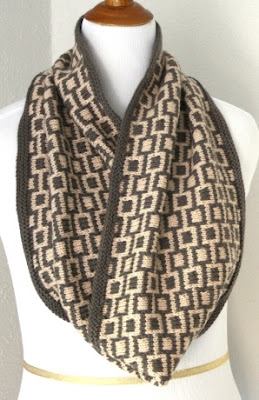 This is called a Tesserino Cowl offered by Louet.  I watched a tutorial video on Very Pink and think I can do it.  I love cowls to keep my neck warm in the winter and this one looks like it will do the job.  But I can't start it until I get at least 2 UFOs finished.

We are expecting to have a quiet weekend so maybe I will be able to get a lot of knitting (and quilting?) done.  Have a great weekend everybody,   GARI

Sweet 16 and My Christmas Cactus Farm 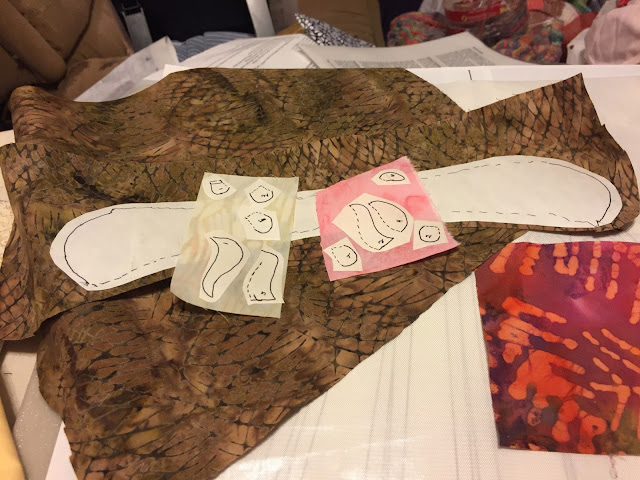 The above are parts of Block 2 of Esther Aliu's Sweet 16 BOM.  I am only four months behind but this is my attempt to try to catch up. 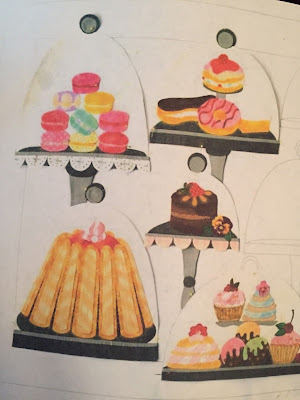 This is a picture of the five blocks we have gotten so far.  I completed the first one (top left) and the above parts are part of the second one (lower left).  But look at all the bits and pieces that go into the next three.  As I see it I will be able to use a lot of the scraps that I keep "just in case."  I have the long tan parts fused together and just need to fuse them to the "cake" base.  I have the pink frosting fabric picked out and the pink and white cream topping also.  I should have this done by the weekend and then I will be starting on Block 3 (top right)  Hubby is really looking forward to that one because of his love of donuts. 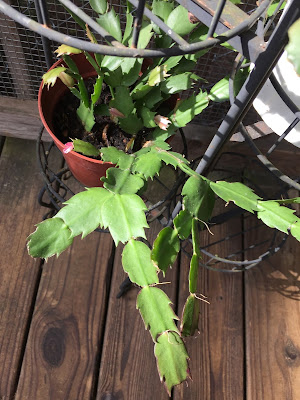 Over three years ago I bought a Christmas Cactus at Walmart.  I anticipated that it would die before Spring as some had done previously.  It, however, not only lived but thrived.  It lived in the bathroom during the winter but out on the deck the rest of the year. 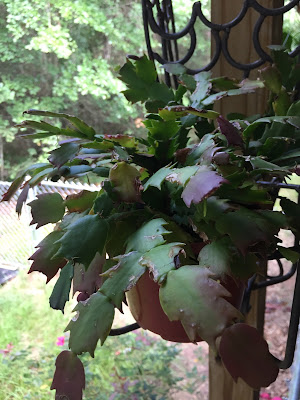 So the next year I went to Walmart and bought a second one.  And this one has done equally well.  And in fact this year the "leaves" are getting bigger and thicker.  I am so proud of them.  The first one blooms bright pink and the second white.  And the both of them bloom both at Christmas and again in the Spring.

But last year I was still pretty weak and unable to shop at Walmart so there was no new plant to keep the streak alive. 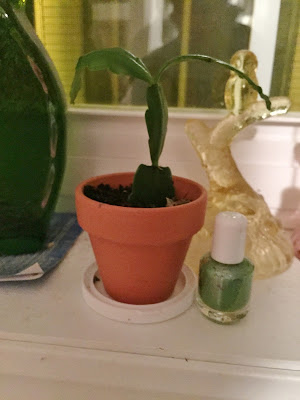 Imagine my surprise and excitement when my sister told me that she had been given a cutting from our Grandma's plant.  I have nothing from my father's family so when my brother in law got a cutting from their plant for me I was overjoyed.

This pot is only 1 1/2" high (I can't remember where I got it) and it seemed just the right size to root my new cactus.  I have it sitting in the bathroom window but move it when the sun shines directly on it and then put it back for indirect sunlight.  When we get roots she will be replanted and take her place on the deck.  Makes me smile.

We usually live a very quiet life but we seem to have several family members planning to visit next month.  Last year we had a family reunion here for the Iron Bowl football game (Alabama vs. Auburn).  I didn't do anything except smile at everyone but I really enjoyed having all my children here.  Next month we are looking forward to distant cousins and possibly even my sister and brother in law.  Additionally our granddaughter and her family will be here and we are hoping that a grandson and his family will be able to be here, too.  Doesn't that sound like fun?  Of course after they all go hubs and I will have to take a 3 day nap.  Gari