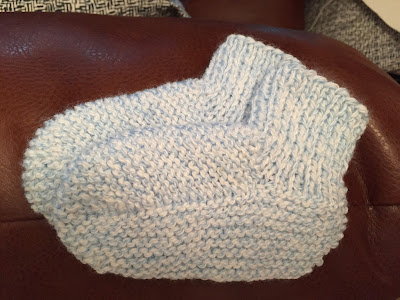 Yes, I am still knitting.  And I seem to be fixated on these slippers so here is another completed pair.  And would you believe that I have three more pair in the works.  This is primarily because I haven't found a sweater pattern I want to knit so slippers it is, for now. 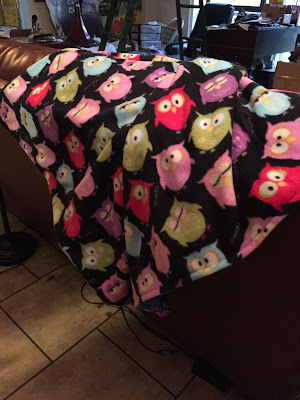 And I did find time to spend time with my sewing machine.  This is a fleece throw.  I love the size, 1 yard x the width of the yardage.  It is amazing how large this makes these throws.  And they are so easy to make.  I am hoping that I can find a couple more interesting fleece pieces to make a couple more throws. 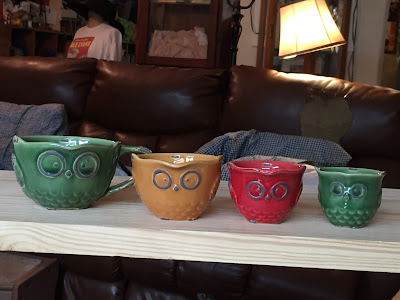 Once again, this is Birthday Month.  I have been very good and haven't expected a gift a day, like I got last year.  But there have been a couple of gifts along the way and apparently we are ending the month with a BANG.  What we are seeing here is a ceramic measuring set sent to me by my sister, I think.  It seems that Amazon sends packages but there is nothing in the box to say who sent it to you.  Anyway, I thanked her for them so I'm sure she will take credit for them no matter what. 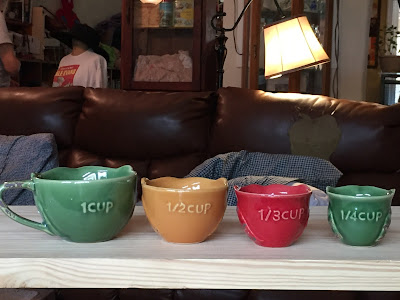 I do appreciate that they are marked for size so they are usable as well as decorative. 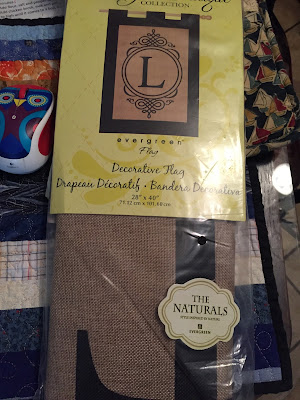 My daughter gave us an Initial Banner to hang outside.  She actually gave us 2 but the other one, a Christmas decoration, is already planted outside and I am too lazy to get up and go outside to get a picture.  Maybe later. 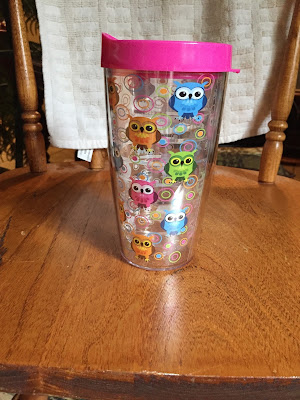 Our SIL found this tumbler and made sure that it came home to me.  I think these little owls are so cute and will be fun to drink with. 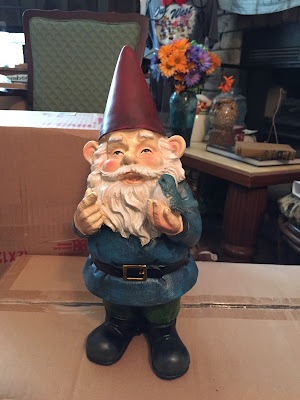 DH is so sweet and he knew that I wanted some Gnomes. Why?, you may ask.  Well a few weeks ago I had several trees cut down because they were crowing the house.  What we were left with was several short tree stumps; not enough money to have them ground down.  DH said he was going to paint them so he could see them when mowing around them.  I suggested we glue Gnomes on them to have something fun to look at. 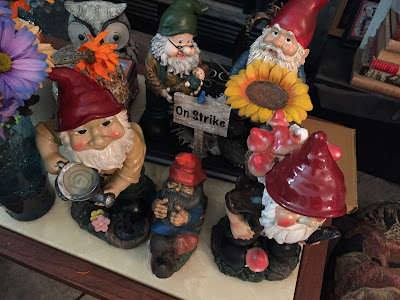 And I got more than the one, I have six.  They are marked for being outdoors and then there are a lot of precautions about bring them in for different weather situations.  Well, that's not going to happen.  So the plan is to poly them with a couple coats to protect them and then they will be on their own until next year.  I think it is going to look so cute. 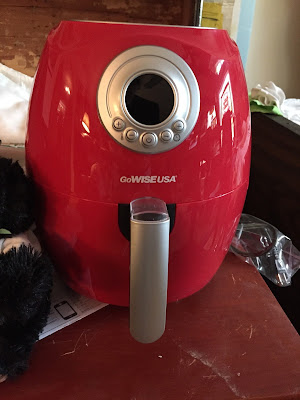 This was quite unexpected.  Yes, I showed DH this and told him what others had said about this appliance, but I did not suggest we get one.  So imagine my surprise when I saw the box.  I think we will try French fries to see if it works as well as advertised. 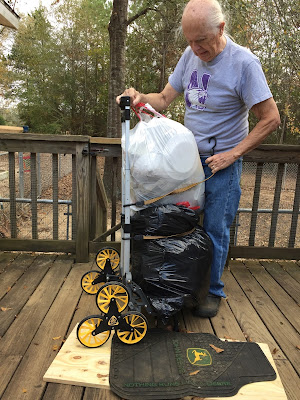 And this was a BIG surprise.  I saw this cart advertised and showed DH because I now am having difficulty bringing groceries in from the car: too heavy and too much.  He poo-pooed me and we dropped the idea.  Well, I guess he had second thoughts.  It came in a really flat box but was completely assembled and DH got to use it first.    Those six wheels make steps so easy and it just glides over our rough ground.  I think we will need to affix a basket on it but even just this way it is it works. 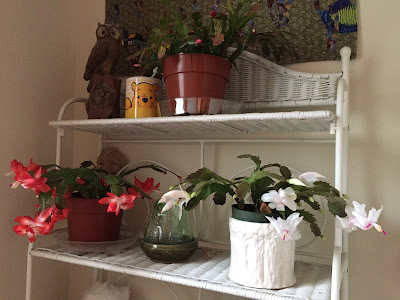 Even Mother Nature has gifted me with this beautiful display.  The buds just popped the day after we brought them inside (brief 30s at night).  They really make me smile.

And that's it for me.  I have another doctor appointment tomorrow, seeking some pain management that does not include drugs.  I had to fill out several pages of admission paperwork, most of which dealt with drugs, past or future.  By the time I was done I had already formed a negative impression of the group of doctors which is not going to help me tomorrow.  Tonight I am going to have to pray for a change of attitude ....... darn.   Gari 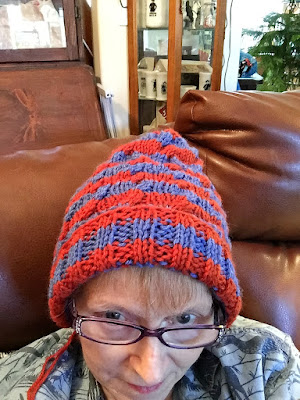 I seem to be on a knitting roll.  This is my newest accomplishment, a hat made without a pattern.  I had just finished the cable socks, see previous post, and still wanted to do a little cabling so I started this hat to match the scarf I completed last month.  And not a moment too soon.  When I got up to go to the lab (blood letting for the oncology doctor) the temp outside was 39F.  I really needed a hat this morning.  This one I did flat, not in the round, so I had to seam it but interestingly the seam doesn't show. 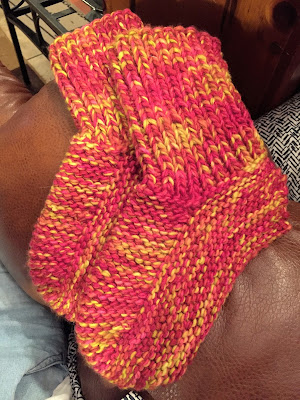 These are slippers that I finished this past week.  I saw the pattern in a YouTube video (https://www.youtube.com/watch?v=DfbacnhhjmQ&t=101s) and thought they would be great for wearing in the studio this winter (no central heat or air conditioning in there).  I don't usually wear shoes over there so having nice warm socks/slippers is a really good idea.  These are really easy and she also has a written pattern, both in English and French. 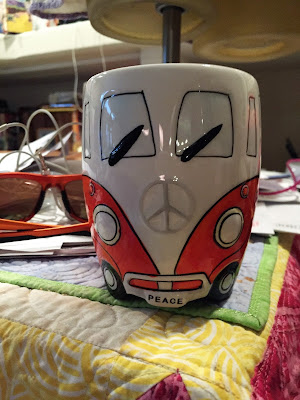 Anyone who has been following me for a while knows that I celebrate Birthday Month every November and that last year my husband gave me a gift every day in November.  He already informed me that that isn't happening this year but he has gifted me a few small things as the month has gone on: cookies and the above coffee cup.  It is in remembrance of the orange and cream VW van we had about 45 years ago and that we loved.  We had originally had a VW camper that we wore out on a 2 month camping trip to the West Coast, with a 5 year old, a 2.5 year old, and 6 month old twins.  The orange and cream one was more like a bus and we loved it until it broke down on an interstate in Mobile, AL and we couldn't get it fixed.  But we still look back on it with fondness. 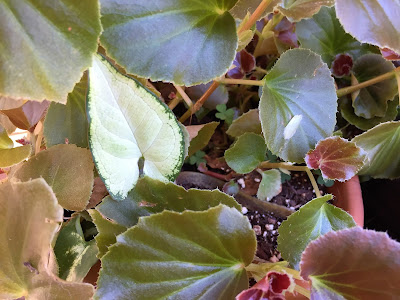 I am including this picture because I am confused about the light green leaf.  It is growing on the same stem as the other leaves but it obviously doesn't belong to the same family.  I found myself singing the "Ugly Duckling" song while checking it out.  Does anyone know what plant this leaf belongs to? 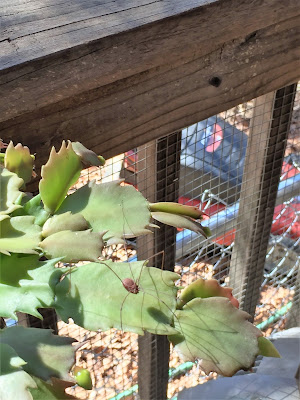 And last but certainly not least, I present our resident Daddy Longlegs.  He was running from plant to plant looking for bugs to eat but unfortunately we had had rain the night before (first in over 2 months) and all of the plants had gotten a good wash.  I apologized as he ran off: this is the only spider that I welcome on our deck.  We also have chameleons and it is fun to watch them catch bugs, too.

And now I am off to continue my search for the perfect cable cardigan and possibly fingerless gloves for wearing while sewing.  I find my fingers stay warm when I am knitting but not when I am holding fabric for sewing.  Wish me luck and have a great week.  Gari 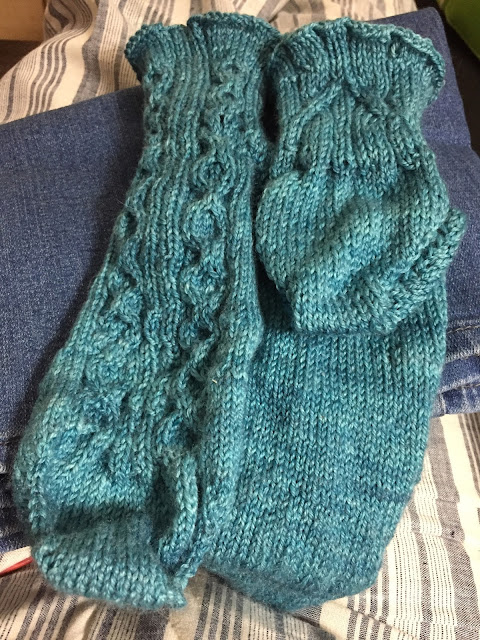 I am so proud.  I finished the KAL socks before the finish time: two days before the end.  I know, I really wanted to finish them before the end of October but it just didn't happen.  I seemed to not want to knit right when I only had 6 rounds to go.  But I decided that the important thing was to complete the task in Michelle's time requirement, not mine.

I had the last 6 rounds done on 11/2/16 and on 11/3/16 we were off to visit friends.  For the first time I decided I could knit while hubby drove and I got the Russian Bind Off completed on half of both socks. Then this morning, while said hubby slept, I finished the bind off on both socks and they were completed.  I would have worn them for you but it was in the 80s and my feet didn't want to wear wool socks yet.

The sock on the left shows the instep pattern that ran from the toes to just before the bind off.  There are several mistakes but I don't think they will be seen when I have them on with shoes.  The sock on the right shows the abbreviated back leg pattern.  I don't ever knit socks with long legs because I live in the South where it isn't cold enough to need to keep the leg warmer than denim can keep them.

Now I am going to buy some more sock yarn so I can knit some more.  And I am going to start looking for a new sweater pattern so I can put my new cable knitting prowess to work on something larger.  Oh, I love the sense of accomplishment.  Gari