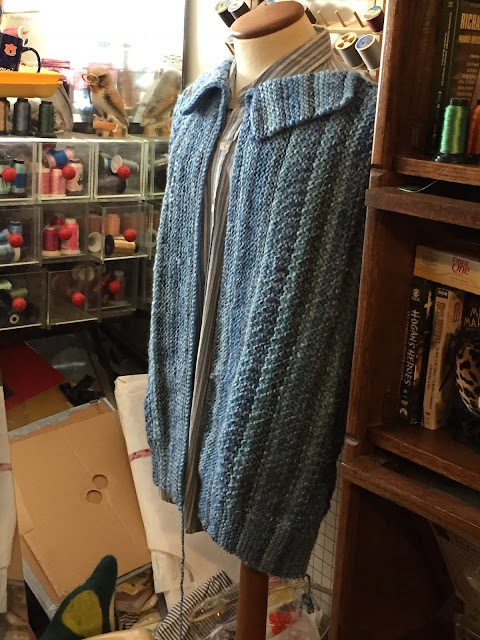 My blue sweater is coming along nicely.  Pictured are the two fronts.  I also have the sleeves done, I think.  I still have the last row to do but I want to check the length before I bind them off.  I am working on the back but after all of these stitches, it seems like it is taking forever.  Every other row is k1, p1, k1, p1, and my hand gets really tired.  I only have about 8" of the back completed so it's a good thing winter is a long way off. 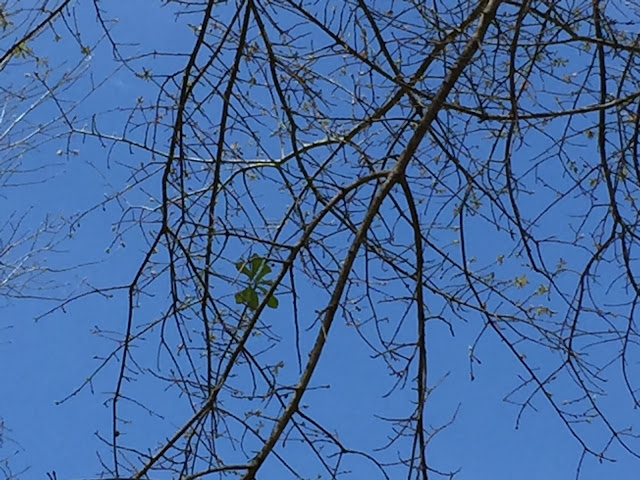 I took this picture last week.  I thought it was funny that there were a couple of fully finished leaves on the bare branches.  I decided that the tree put these out kind of like scouts to test to see if it was going to be warm enough to leaf out.  It must have worked because now all of those branches have little leaves and are spewing pollen all over the place.  I am not allergic to the pollen but many of the people around here are and are really suffering. 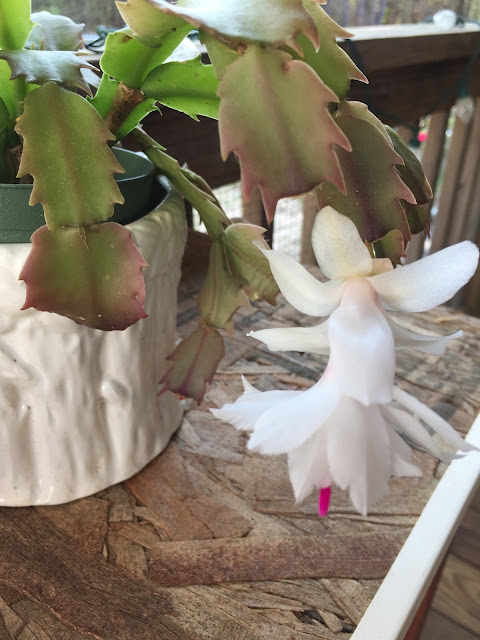 And then there is this Christmas cactus.  It seems to be really confused.  But I congratulated it on the beautiful flower, which I am willing to enjoy any time of the year.

Last week we celebrated DH's birthday.  I had given him a Lone Ranger Lionel train set for Christmas so for his birthday I took him to a "train store" and let him pick what he would like as an addition to his set-up.  Then later in the week our daughter took us for a post-birthday dinner and then back to the train store to get a little more.  After he gets these parts set in place I will try to get a picture of his new toys.

DH is on Spring Break this week.  It will be nice to have him home every day.  We will be doing some furniture moving and then rewarding ourselves by going to see Beauty and the Beast.  I'm sure we will come up with other things to do but knitting and sewing will still be in my daily plans.

Since last we met I had my back surgery to have a stimulator implanted which has greatly decreased the pain I feel in my back.  The only post-op thing I was told was to not pick up anything over 10# for four weeks.  When I went back for the post-op appointment I found I am in a "study" regarding the implant and need to be seen every 3 months, I don't know for how long.  I asked if they would be paying me to come in but was told "no" because it would be seen as collusion.  I better not be charged for those appointments.

Last week I had a total bone scan to see what progression of the cancer in my bones had occurred.  I also had an organ scan to see if there was any cancer impact there.

Then on Friday I started having abdominal pain.  I didn't feel sick but did hurt and couldn't eat.  I also was very restless and figured I must have the flu.  By Sunday I was not getting better, was very weak, and shaky.  I decided I was dehydrated and needed help so off to the ER we went, along with our daughter (the nurse) and her husband.  Five hours later I was rehydrated, was told I didn't have the flu, was given anti-nausea medication (I didn't have nausea), and was given the results of my two scans.

I was told that almost all of my skeletal system did not appear worse than the scan that was done in 7/2015.  There is, however, one area where significant deterioration was noted.  The ER doc said he thought the pain I was experiencing from this bone deterioration and suggested pain medication.  I decided that I will use Advil and that seems to be taking care of that pain.   And, nothing was noted in my organs. 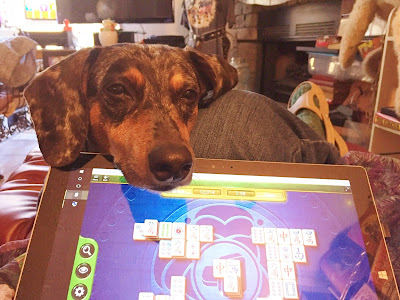 Meanwhile Abby has taken up Mahjong. 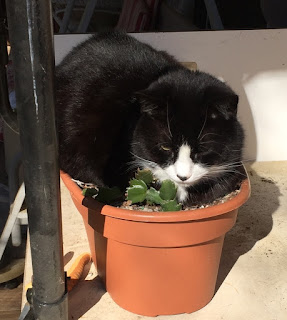 And Stubby has taken up protecting the baby Christmas cactus from the cold.

I have been knitting and just a very little quilting.  I keep thinking I will feel that I can get back into quilting but even thinking about it makes me tired.  Gotta build my strength.   Gari
Posted by Gari in AL at 5:52 PM 2 comments: