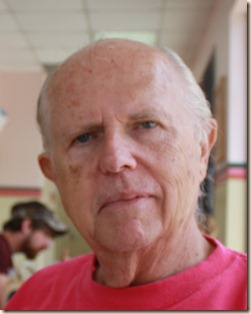 This is my husband, Eric.  We have been married 51 years and later this month (March 22) he will be turning 71.  He has been teaching for 48 years.  He retired in 2006 but because he is so popular with students, peers and even administrators, he has continued to teach on a “part-time” basis.  He teaches at two different community colleges and for a couple of years at three (each of the presidents has been a peer instructor at one time or another).
The pictures now showing on the blog header are all of Eric at various stages in his life.  In 2004 I made a family calendar and this is the photo page for March.  I wanted his children to know and remember him in all his childhood/adulthood stages (which have not been too different from each other).  The women in the top left picture are his mother and grandmother.  His mother died when he was 11 and his grandmother not too long after.  The next picture over is of Eric and his sister: they are one year apart with Eric being the elder.  Next, to the right, is Eric as a pre-teen and then you see the boy I married.
The bottom pictures are of Eric when he visited his father in FL in 1961 and again in 1989 years later when we went looking for the house.  Even though it had been so many years later, Eric was able to give enough direction that we found the house and he was so pleased to see it looking much the same.
The picture furthest to the right is Eric dressed in a sweatshirt with knitted band I made him and pants given him by our DS#3 and DIL.  He put them on for this picture and they have been in my studio ever since (15+ years).  I keep thinking I am going to make vests out of them but so far nothing has happened. 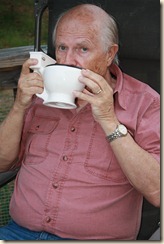 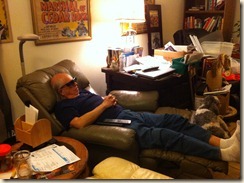 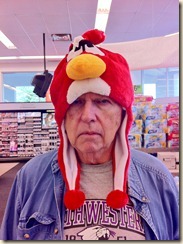 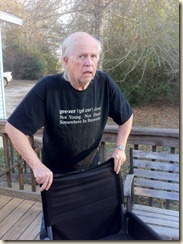 A you can see, life with Eric has never been dull.  Not all peaches and cream but never dull.

Happy Birthday, Sweetheart!
Posted by Gari in AL at 10:02 AM

Happiest of birthdays to Eric. My youngest shares his day. He only has 40 years on her. :)
Love all the pictures.

Happy birthday, Eric, and who would want all peaches and cream anyway? Variety is the spice of life!

birthday blessings to both of you!

Happy Birthday hugs to your Eric!

I love this! And I thought the pic in the upper-right hand corner was Todd. Does this mean Todd will look like Eric when he's 71? Do I dare imagine that? :)

I can tell he has a great sense of humor!! Laughing at the saying on the T-shirt. Happy Birthday Eric.