I have been missing in action for the last 3 months.  Missing, yes, with almost no action during all that time.  I did a one week medication mistake that threw me for a loop (really dumb mistake on my part) but then for the next 2 1/2 months I just sat, doing nothing, and being quite comfortable that way.  I even stopped going to the studio or going out to eat.  Slowly I started to regain strength and do a little.  I surprised DH one day when I suggested we go out to eat: he was so excited.  So I am still kind of weak but seem to be getting back to doing some things. 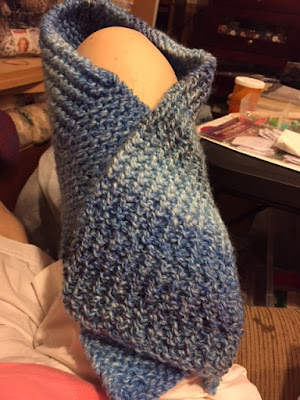 The first thing I worked on was this scarf.  I had started it months ago with the leftover yarn from the sweater I have knitted but still not sewn together (it is 95 outside so I don't need a heavy sweater yet).  Anyway, I started with small needles but then decided I liked the bulky better so knit with size 10.  Then I decided to take out the beginning part done on size 7 needles.  Did you know that it is really hard to rip out backwards?  Well, it really is.  I had to pull the yard through each stitch which took a really long time.  I finally got it all out and then reknit the first part to match the rest.  I toyed with the idea of this being a cowl but bound the ends off anyway. 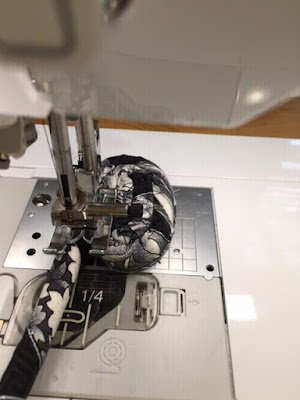 Then yesterday I decided to sew a fabric bowl.  11 years ago I bound the cloths cord with fabric but kind of fell out of interest in sewing this thing together.  When I moved back to AL I brought the cord with me and hid it under the sewing table.  I could still kind of see it but just ignored it.  So I crawled under the table and pulled this covered cord out and began stitching.  Of course I made a mistake right off the bat. 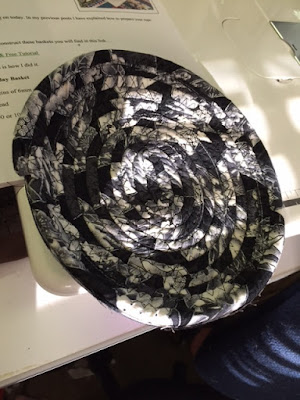 I set my stitching up so that the "bowl" was building up inside the machine's throat.  You probably can't tell but I did round up the edges and decided that this was going to be a "plate".  I have started another one, going in the right direction, but ran out of time so I will get back to you with my progress. 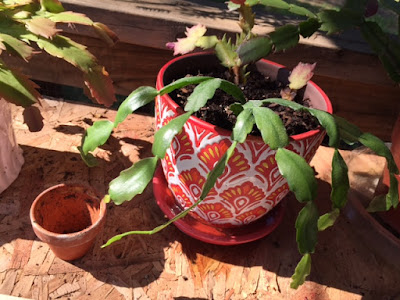 This morning I  replanted my grandma's Christmas cactus.  My grandma died when I was 12 years old.  She was a hand quilter who frequently quilted other people's quilts to earn an income.  I was told that this cactus is a cutting from her's.  When I got it it only had 3 ribs but look at it now.  It has been a house plant so I figure it will have to have some adjustment time out on the deck. 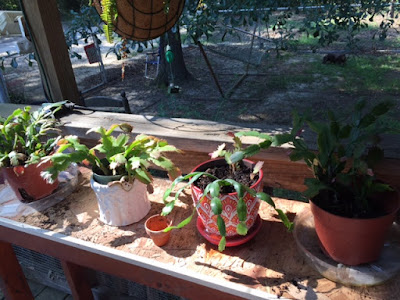 It has joined my other  plants and is enjoying the warm soft breeze.  When I decided to take this picture I included the little pot it is has been living in.  I imagine she is experiencing culture shock.

I don't do a lot every day.  I seem to wear out after only a short time and frequently it takes a day or two to recuperate.  But it really is nice to be at least a little productive again.  Please come back and check on me.

That really was a change in size of pot for your cactus. I have 2 broken off pieces in water on my windowsill. One has been there 2 years waiting for me to pot it and it even bloomed this past winter. I really need to get serious and pot them and maybe even repot a few of the others.

I'm sorry you haven't been well, but am really glad that you are starting to rebuild your strength. All the projects you are working on are lovely.

It's good to have you back. I did miss you. Take care of yourself and take things slowly.

Glad to see you back. The heat's probably not helping much either, it saps everybody. Looking forward to seeing what you've been up to this week.

Isn't it nice to be able to create again ? I'm glad you are back and feeling better.